Why do we remove an eye?

The reasons for removing an eye are variable. In most cases we remove an eye because there is little or no vision and the eye has become uncomfortable.  It might also be that the appearance of the eye is not acceptable to a patient and that by removing it we can provide a cosmetic shell that will give a more symmetrical appearance.

In some cases there may a tumour within the eye that requires removal.

What are the different options available when removing an eye?

When removing an eye there are several decisions to make. This includes how we remove the eye, and how we fill the eye socket.

When removing an eye we can either eviscerate the eye or enucleate the eye. In both cases once the eye is removed an implant is placed at the back of the eye socket and the tissue is closed over the top.  A custom made artificial eye is then placed in the eye socket at 6 weeks following surgery that will be matched to your other eye. This shell can be taken out and cleaned.

Evisceration surgery involves removing the contents inside the eye but leaving behind the white outer coating of the eye known as the ‘sclera.’ 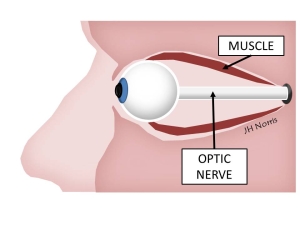 The sclera is opened and an orbital implant is placed. 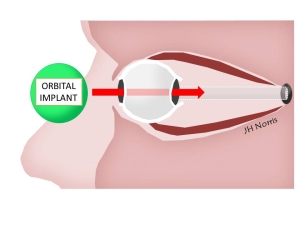 The sclera and lining of the eye is then closed over the top of the implant to prevent any exposure in the future. A cosmetic shell is then placed over the front of the healed socket. Initially a clear conformer is placed in the socket. This is then replaced at about 6 weeks for a shell that matches the healthy eye. The shell can be taken out regularly and cleaned. The artificial eye team will show you how to do this. The muscles that normally move the eye are detached from the wall of the eye and the whole eye is removed. An implant is then usually placed at the back of the eye socket. The muscles that move the eye are then attached to the implant. For the first 6 weeks a clear shell is put in place. A cosmetic shell is then placed in the socket once it has healed – this will be matched to the healthy eye. What is the orbital implant?

The orbital implant is needed to maintain volume in the eye socket. It sits behind the lining of the eye socket and shouldn’t be confused with the cosmetic shell which is removable and sits in-front of the tissue lining the socket but behind the eyelids.

There are many different implants available which each have their own risks and benefits. The commonly used implants are acrylic, hydroxyapatite (coral) and porous polyethylene (Medpor®). The use of any given implant depends on a number of factors including your age, the size of the socket, the degree of possible implant. The reason for eye removal can impact the choice of orbital implant. In some cases we will use fat from your abdomen instead of an orbital implant.  This is usually in cases when the risk of using the other types of implant is too high.

What are the risks of orbital implant?

The most common risks associated with removal of the eye and insertion if an orbital implant include:

What happens before surgery?

Prior to surgery the team will see you in clinic and discuss the treatment options with you at this stage. If you are happy to go ahead with surgery we will normally consent you for the operation and you will need to sign a form.

You may then need to be pre-assessed for the surgery whereby a nurse will ask you some questions about your general health should the doctor feel that this is necessary. On occasion we may take some blood tests and may ask you change your medications prior to surgery. The pre-assessment may take place on the day of your clinic visit, on a subsequent day or even over the telephone.

On the day of surgery you will be told a time and place to come to the hospital. You will be met by the nursing team and one of the surgical team will also see you.

Often when after eye socket surgery you will need to stay in hospital overnight and will need to bring some overnight clothes and toiletries for the duration of your stay. We advise that you also bring in your medications with you when you come into hospital.

Sometimes you may have to wait for a few hours before your surgery is performed and this depends on your position on the operating list. A general anaesthetic is usually preferred when performing eye socket surgery and the anaesthetist will also come and see you.

What happens after the surgery?

On removing the pad you will be able to see a clear conformer (shell) in the eye socket which will stay in place for the initial 4-6 weeks. Your eyelids may be a little swollen and this will usually settle within a few days.

Mr Norris will show you how to clean your eyelids and socket and how to apply an antibiotic ointment.

What do I need to do after surgery?

Normally we ask that you keep the wounds around your eye clean after surgery. You can clean the wound by allowing boiled water to cool and gently dabbing the wounds with a cotton bud.

We will give you some antibiotic ointment (usually Chloramphenicol) to apply to the wounds and to the eyes after the surgery to help protect against infection.

We do not normally need to remove any stitches.

You should avoid any strenuous activity including lifting heavy objects for at least two weeks and avoid swimming for three weeks after surgery.

Usually patients are quite anxious after having surgery near their eyes and most problems do settle with time. If you developed a reduction of vision in your other eye or if there is bleeding or severe swelling then you should seek medical attention immediately. Mr Norris will happily see you with any problems. Please refer to the emergency contact page (under the header ‘Contact’) if you need advice.